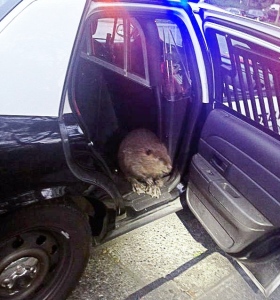 Humans aren’t the only ones lining up for a quick lunch at Chick-fil-A. Last week Bellevue Police responded to a call about a beaver wandering the restaurant’s parking lot. The beaver, who apparently didn’t know Chick-fil-A is closed on Sunday, or might have been lining up early for Monday’s lunch rush, received a patrol car ride back to a nearby beaver pond.

Bellevue really is a city in a park. Its easy to forget that the city is surrounded by open space, waterfront, wetlands and native protected growth areas. Bellevue has 2,500 acres of parks and open space including nearly 100 city maintained parks. Its not unusual during an early morning walk in the neighborhoods and parks adjacent to downtown to see raccoons, bunnies, an occasional coyote, squirrels and of course less cute urban rats. Development may have altered the local wildlife habitat over the years but its also encouraging to see that wildlife has adapted to city living.